We bring the World to Singapore, and take Singapore to the World.

Tax Benefits of Incorporating a Holding Company in Singapore

Apart from keeping a legal distance from the parent undertaking and its Asia-established investment holdings, a holding company in Singapore also allows foreign firms to benefit from the sovereign island city-state’s several tax treaties.

Singapore’s DTAs (double taxation agreements) restrict or do away with the extent of withholding taxes to be paid on dividends from foreign holdings and the country’s low corporate income tax rate. Also, the absence of capital gains tax makes it a perfect jurisdiction to operate a holding company.

Double taxation happens when companies are made liable to pay taxes on the same income or capital by more than one tax jurisdictions. This is a common occurrence when an entity earns in a country that is not its resident nation. In these situations, the source state where the income has been earned and the entity’s residence state, both may be entitled levy taxes on the same income as per their domestic tax laws.

One more example of double taxation is when an entity is considered a resident of two states and is thus has a tax liability in both. Since double taxation acts as a key element against across the border investment, nations usually get together to write off bilateral tax with the help of DTAs.

Singapore has one of the highest-priced networks of DTAs throughout the world, with more than 70 all-inclusive DTAs in operation that apply to income as well as capital. Singapore has DTAs with China, India, and all member nations of ASEAN except Laos and Cambodia.

Moreover, at present, Singapore has several confined DTAs that apply only to the income earned from aviation and marine transport, with treaty partners inclusive of Hong Kong and the US. Concerning countries that have no DTA with Singapore, island city-state offers unilateral tax credits to avoid double taxation if specific criteria are fulfilled.

An investment holding company is one that earns its revenue by managing assets such as real estate or shares of companies. Singapore has a large number of these types of companies that are owned by foreign entrepreneurs from all around the globe. Let us take a look at a few reasons for people from every region of the world to want to establish a holding company in Singapore.

Singapore has a tax regime that levies very low corporate taxes on companies. In addition to this, the government also offers tax refunds and incentives to businesses, thus bringing down a company’s tax burden even more. The Singapore government levies no tax on capital gains. Plus, there are no estate duties in the country.

No Tax on Dividends

A company can announce dividends and pay them off to its stakeholders provided that it is earning profit from its operations. In Singapore, no earned income can be taxed more than once and therefore, once a company has fulfilled its tax obligations to the Inland Revenue Authority of Singapore (IRAS), it can make payment of the dividends to its shareholders and there are no taxes attached to this dividend.

Singapore has signed a large number of Double Tax Agreements (DTA) with various countries around the world. A DTA aims at ensuring that entities and persons who are Singapore residents and who draw income from an overseas jurisdiction do not have to pay taxes twice.

It also ascertains that just the same corporates and individuals who are citizens of the countries that have signed DTAs with Singapore and are into revenue production in the country do not have to pay tax twice.

This is of utmost importance because the income on which taxes are paid in Singapore is not liable to be taxed again if the funds are taken out of Singapore and brought into a foreigner’s country of origin. This is subject to that particular country having a DTA with Singapore.

This is a list of the countries that have signed Double Tax Agreements with Singapore. 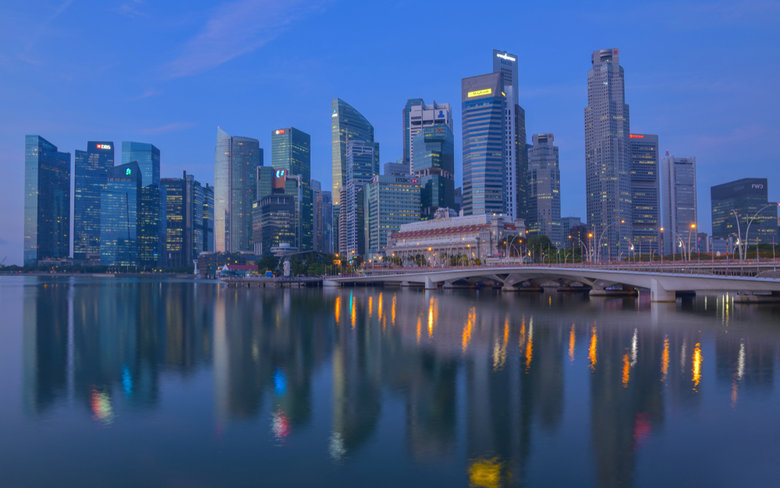 Singapore, with its very strong rules and regulations, is like a fortified castle for investors’ assets. The government never grabs hold of assets without a reasonable and compelling grounds. If there is a situation that demands to appoint a capable lawyer for issues that can only be resolved in the court of law, the process is rather straightforward.

All legal paperwork is supposed to be done in English. The accounting and judicial system have been designed to be in tune with the global practices.

The Ease and Affordability of Incorporation

Setting up an investment holding company in Singapore is both, simple as well as economical. Compare to other jurisdictions, the cost to set up and maintain a Singapore registered company is very low.

Even though safe harbors such as the British Virgin Islands and the Cayman Islands have no taxes, the expenses that go into raising and running a company in these jurisdictions might be very steep. Practically speaking, in the majority of the cases, the cost of building and operating such companies in these tax havens is so much that it exceeds the amounts saved in taxes.

Incorporating a Singapore registered Investment Holding Company is speedy and inexpensive and can be carried out by an ACRA Filing Agent.

In the capacity of an investment holding company, wealth management is a vital function and so is the capacity to use and move wealth.

Some tax havens have a modest reputation in the global market. Also, companies in weak tax jurisdictions are much less preferred and many governments regard assets that are under the control of these companies as suspicious properties.

Singapore, on the contrary, is famous for its good management of companies and for being non-corrupt. Assets in the possession of Singapore registered companies are often considered more preferable as compared to those in other similar tax havens.

Incorporation of a company in Singapore, specifically a holding company is a wonderful means for a new business owner to broaden his operations without taking needless risks. Merging the resources of a holding company and its subsidiaries result in cooperative in purchasing capacity, terms of finance and the capacity to invest in bigger projects.

Setting up a holding company is simple and just a matter of hours, if all the documents are complete. We can help you set up and maintain your Singapore holding company.

You can get in touch with us now for that perfect solution designed just for you.

Thank you for your interest in Pearson.