We bring the World to Singapore, and take Singapore to the World.

In most of the cases, a promising business atmosphere could be a significant additive to entrepreneurial success. Singapore, as well as Australia, are among the best destinations in the world for doing business.

On the other hand, there are a couple of sharp distinctions that are necessary for a business to take into account while making a choice of a turbocharger for its upcoming endeavor.

This article is a comparative analysis, focusing on the contrasts of doing business in Singapore as well as in Australia.

As stated in an article in Australia’s Business Spectator under the heading ‘Is Australia now the most boring place to do business,’ 42.2% of the nation’s 770,000 businesses are taking part in one or the other type of activity that results in innovations.

Nevertheless, the percentage of companies involved in innovations has reached a point of stagnation when it is seen against the rate at which business is growing. The article also stated that the OECD (Organization for Economic Co-operation and Development) believes that Australia has the constituents for innovation, that is to say, solid financial market and competition in the market, a lively research culture and working population.

However, it was deficient in startup funds for new businesses and cooperative alliance between primary stakeholders.

This is in addition to the other factors cited as most problematic for doing business in Australia in the GCR. They include inefficient government bureaucracy, tax rates and tax regulations.

Both Singapore and Australia are among the best places in the world to do business. However, there are some challenges to doing business from Australia, partly due to these issues and its geographic isolation.

To motivate investors to plough in capital into businesses, it also necessitates countries to have laws for their security. The Doing Business report makes use of the Strength of Investor Protection Index to evaluate the openness of transactions, the shareholders’ capacity to take officers and directors to court, for wrongdoing and accountability for self-dealing.

Singapore secured 9.3 out of 10, whereas Australia secured 5.7, partly because of mediocre results in the director’s obligation sub-indices. This pushed Singapore to the 2nd slot and Australia, to the 68th, as far as investors’ security was concerned.

Also, across-the-border investments have the backing of stable business policies and cross-regional commercial deals. On top of that, Singapore stresses more on attention towards upper-levels of financial accountability and investor security to stay clear of evasion of taxes and fraudulent practices.

With an intense focus on the observance of laws such as FATCA and BASEL III, there will be an ongoing assurance that the wealth of genuine investors is safe.

In the Doing Business report, Australia is rated 44th around the globe, in terms of payment of taxes. This is an indication of a better version of its 49th position in the 2013 report. None the less, Singapore preserved its 5th position every year, because of its levels of taxation and filing process.

The Government of Singapore charges a marginal corporate tax at the rate of 17%. Concerning Australia, this is 13% lower.

Resident companies operating within Singapore can avail special corporate tax rates, whereas in Australia corporate rate (30%) is enforced on both, resident and non-resident firms. Besides this, resident companies have a tax liability on their income earned all over the world and also capital gains.

Non-resident companies in Australia are supposed to pay corporate tax on their Australian-derived earnings, and also on their capital gains on the discarding of a Taxable Australian Real Property (TARP).

What is more, businesses in Australia make payments 11 times per year and their annual filing takes away 105 precious hours each year, which includes preparation and payment of taxes. By comparison, companies in Singapore are required to make five tax payments annually and 82 hours of the year are spent in preparing, filing and making tax payments. 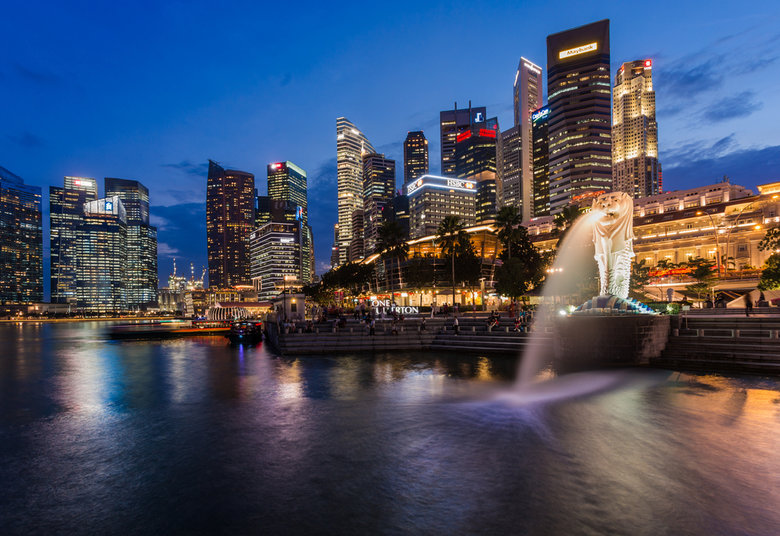 Concerning the ease of registering a company, Singapore as well as Australia, facilitate the work for firms. In conformity with the Doing Business Report, Singapore was placed at the 3rd position while Australia was on the 4th, throughout the world.

A factor that is common to both the countries is that to launch a business either of the two places, three procedures around 2.5 days are required. At the same time, Singapore was placed higher on this parameter because completion of this process is comparatively more expensive in Australia (AUD 433). On the other hand, to start a business in Singapore, you have to spend S$385.

Besides this, coping up with construction permits is much less time-consuming in Singapore, as compared to the same in Australia. As reported by the Doing Business report, one needs to go through 11 processes for setting up a warehouse in either of the two nations. The difference lies in the fact that this process takes 26 days in Singapore and 112 days in Australia.

Apart from pro-foreign investment policies, the security of Intellectual Property (IP) rights lends a helping hand to give a lift to investor faith. Based on the Global Competitiveness Report (GCR), Singapore is second around the globe and first in Asia for the best of all IP protections.

2011’s Political & Economic Risk Consultancy Report and 2012’s International Property Rights Index, both have officially placed Singapore at the peak in Asia, on the benchmark of IP security. Australia remained far behind at the 21st position in the GCR.

In Singapore, the overheads associated with the procurement and in-certification of IP rights qualify for availing tax concessions provided by the PIC (Productivity and Innovation Credit) scheme. Businesses are eligible to avail 400% corporate tax discounts or a cash payment amounting to 60% of the costs if they are doing business in Singapore.

The GCR referred to restraining employment legislation as the most hindering factor in doing business in both Singapore and Australia. All the same, it gave Singapore the highest-ranking status for ‘Labor Market Efficiency’. The classification saw Singapore hitting a high score to the tune of 9 out of 10 indicators.

At the same time, Australia replaced Singapore with regards to the extent of women’s involvement in the labor force. On this benchmark, Australia was at the 60th rank, while Singapore followed at 84th place.

The above analysis endorses that though Australia has a robust capital market, competition-oriented working population and a dynamic tradition of innovation, there are some aspects like unwanted government intervention, steeper taxes and obstructive tax laws, together with insufficient startup funds that overshadow its conducive-to-investment image.

In addition to all these factors, Singapore is ahead of Australia, because of its extraordinary reach to the world’s biggest markets inclusive of India and China.

Even though Australia is among the world’s largest economies, Singapore has sprung up faster to be among the world’s topmost financial hubs. The drawback comes strong in the form of businesses and individuals in Australia having to pay higher income tax than most other countries.

Be it Singapore’s pro-business environment or superb connectivity to the developing economies of the world, there is no doubt that Singapore surpasses Australia as an investment location of choice. Connect with us to start your business in Singapore.

Thank you for your interest in Pearson.